How to unblock Wikipedia with CyberGhost VPN

Enjoy reading on your topic of interest

Since its launch back in 2001, Wikipedia has slowly but surely transformed into everyone's go-to free online encyclopedia. Despite its modest roots, Wikipedia now boasts over 40 million articles in 301 different languages. With over 300,000 active users it doesn’t seem like the open source project will stop anytime soon.

As of April 2019, diverse content can be found of different versions (or languages) of the Wikipedia library:

No wonder Alexa ranked Wikipedia the 5th most popular website.

The platform also covers a wide range of topics and subjects of interest:

When you also factor in Wikipedia’s open and uncensored policy, it’s clear why most internet users turn to this encyclopedia for information.

Not everyone supports Wikipedia

Unfortunately, not everyone sees Wikipedia as a beneficial resource. The presence of politically, religiously, and pornographically sensitive materials has led it being censored by national authorities in some countries.

At least some content from Wikipedia was blocked in the following countries:

The censorship isn’t limited only to restrictive or prudish governments. Wikipedia can also be blocked on a local scale through ISPs. A typical example of this is Wikipedia being restricted in schools, universities, and student dorms, to prevent plagiarism and encourage research.

But that shouldn't stop you having access for legitimate reasons. CyberGhost VPN can help you unblock Wikipedia. 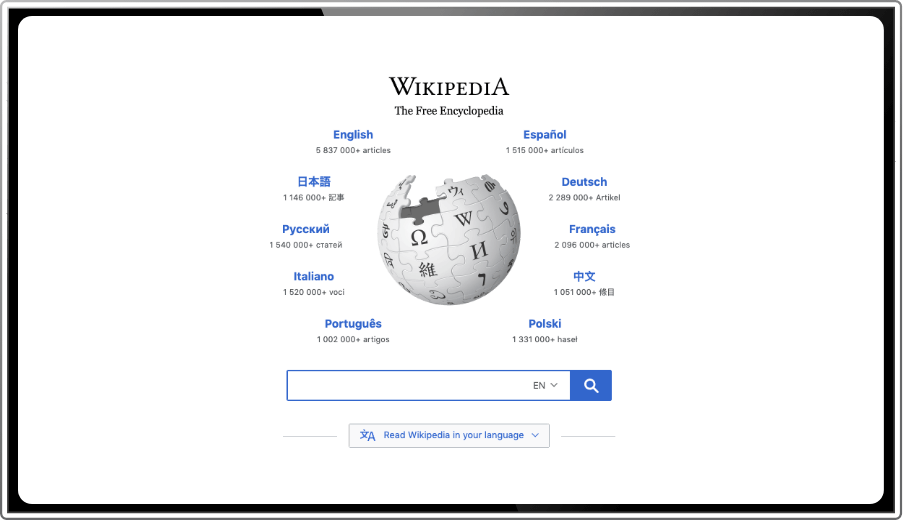 Internet Service Providers usually know whether to give you access or not to specific web pages based on your IP and location.

But with CyberGhost as your VPN provider, your IP address is hidden and replaced with one from our system. This way, you’re able to bypass restrictions and access the free educational content of Wikipedia.

Whether you're using the Wikipedia app on your phone or you’re on your desktop, we’ve got you covered. We have a wide range of apps, which encrypt your entire internet traffic.

You can quench your thirst for knowledge on Windows, macOS, iOS or Android devices and no one can snoop on you.

And the good news keeps on coming. Just one CyberGhost VPN subscription can simultaneously protect up to 7 devices. You’ll be training your brain and keeping your entire digital life safe and private.

We have a network of more than 6500 servers in 90+ countries, and we’re continually expanding our server park. No matter where you are, there are servers available for you.

Ditch the proxy, choose a VPN for Wikipedia

Using a free proxy service to reroute your internet traffic might seem appealing, but it’s not risk-free. Since there’s no encryption involved, you’re handing over your data to a third party. And this is concerning.

If you’re after unblocking the online encyclopedia and surfing safely, the VPN service of CyberGhost is what you need.

Good VPN
Good VPN. Unable to connect to Hotstar. They have an extensive number of servers.
Bryan Siler

Here are some more details on accessing Wikipedia with CyberGhost VPN. For further guidance, get in touch with our Customer Support team via live chat or by email. They are available 24/7 and can handle your request in German, English, French, and Romanian.

If you’re interested in editing articles, you can create an account for free. If your country has restrictions on this, connect to a CyebrGhost VPN server, and you’re ready to go.

What devices can I use to get on Wikipedia with CyberGhost?

You can access Wikipedia through the browser or via their dedicated app for Android and iOS.

CyberGhost VPN covers a wide range of devices, such as Windows, macOS, Android, iOS and Linux. Knowledge will also be at your fingertips.

You can also try out our “Best location” feature. It will automatically connect you to the best server for you.

With CyberGhost VPN you get so much more than just access to Wikipedia!

Your entire digital life will be protected by our military-grade encryption, kill switch and DNS-leak protection. With these features, snoopers won’t be able to able to access your data. And our strict No Logs policy ensures you’re the only one knowing what you do online.