Emmy Nominations 2022: Who’s Nominated & Where to Stream Them

Table of contents
A Record-Breaking Year for the Emmys
2022 Emmy Nominees (and Where to Stream Them)
Do I Need A VPN to Stream the Emmy Nominations 2022?
Why CyberGhost is the Best VPN for Streaming the Emmys 2022
FAQ

The 2022 Emmy nomination announcement livestream on July 12th brought you some familiar faces, surprises, and some firsts. The announcement special was hosted by J.B. Smoove (from HBO’s Curb Your Enthusiasm) and Melissa Fumero (from NBC’s Brooklyn Nine-Nine). It’s still available to stream on the Emmy’s official website and Youtube channel.

CyberGhost VPN has lightning-fast, streaming-optimized servers for YouTube. That means you can securely stream the 2022 Emmy nominations in crystal-clear UHD with no buffering.

A Record-Breaking Year for the Emmys

HBO and HBO Max received the most Emmy nominations in 2022 with 140 (108 for HBO, 32 for HBO Max) in total. HBO’s acclaimed drama series Succession got 25 nominations, the highest for any show. It also broke the Emmy record for acting nominees with 14 nominations in total.

My personal 2022 favorite, Apple TV+’s Ted Lasso, got the most comedy series nominations for the second year in a row, with 20 in total. Ted Lasso himself, Jason Sudeikis, won the 2021 Emmy for Outstanding Lead Actor in a Comedy Series. However, the early favorites for the Emmys 2022 are Steve Martin for Hulu’s Only Murders in the Building and Bill Hader for HBO’s Barry.

Hader has the most individual nominations, with 4 in total. In addition to lead actor, he’s also nominated for writing and directing for Barry and guest actor for Curb Your Enthusiasm.

Netflix also made Emmy history in 2022. Its breakout hit, Squid Game is the first non-English-speaking series ever nominated for best drama series. That’s not really a surprise, though — it’s Netflix’s most-watched show of all time. Lead actor Lee Jung-jae is already taking home a lot of awards and could add an Emmy to his collection on September 12th.

2022 Emmy Nominees (and Where to Stream Them)

Here’s a list of nominations for some of the Emmys 2022’s most-acclaimed shows and anticipated categories. Visit Emmys.com to see a complete list of the nominees.

CAPTION: Some fan (and my personal) favorites missed out on 2022 Emmy nominations

Critics and fans saw some of their favorites miss out on Emmy nominations in 2022, while some shockers made it to the ballot. Some of the biggest snubs of the Emmys 2022 include NBC’s drama This is Us and ABC’s comedy black-ish getting zero nominations for their final seasons. Paramount Network’s Yellowstone came up empty, and Apple TV+’s Pachinko got just one nomination. Yet, Netflix’s Inventing Anna got three nominations despite lukewarm reviews.

When it comes to acting snubs, nobody from Stranger Things got any Emmy love — many think Sadie Sink should have been nominated for her role as Max. Other acting snubs include This is Us’s Mandy Moore and Yellowstone’s Kelly Reilly. They were left off while Killing Eve’s Sandra Oh and Jodie Comer were nominated despite what most felt was a disappointing final season. 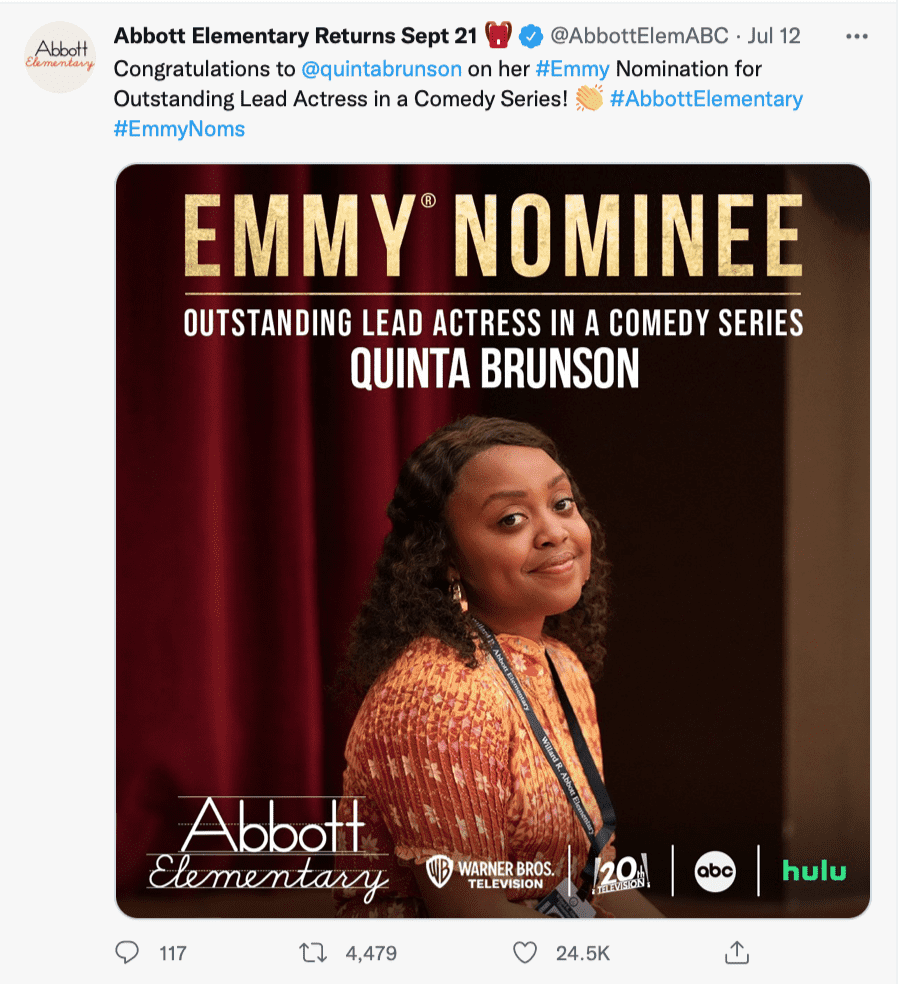 Now for the good surprises. Rhea Seehorn finally got a nomination for Outstanding Supporting Actress in a Drama Series for Better Call Saul. ABC’s Abbott Elementary won the hearts of the Television Academy — which is tough for network TV to do these days. It got seven nominations. Its creator and star Quinta Brunson became the youngest black woman ever to get an Outstanding Lead Actress nomination for a Comedy Series.

Do I Need A VPN to Stream the Emmy Nominations 2022?

You can stream the 2022 Emmy nominations without a VPN, but a VPN will give you a better, more secure viewing experience on any network. That said, not all VPNs offer Emmy-worthy service.

Why CyberGhost is the Best VPN for Streaming the Emmys 2022

Get CyberGhost VPN and you can enjoy the 2022 Emmy nominations and winners announcements on any device and network in UHD with no buffering.

Who has the most nominations at the 2022 Emmys?

HBO and HBO Max lead the way with 140 2022 Emmy nominations (108 for HBO, 32 for HBO Max). HBO’s drama series Succession has the most nominations with 25 in total. Bill Hader has the most individual nominations, with four. He’s nominated for outstanding lead actor, writer, and director for HBO’s Barry, and guest actor for Curb Your Enthusiasm.

CyberGhost may not be up for an Emmy, but we’re the best VPN for streaming the 2022 Emmy nominations. It’s quick and easy to sign up, but if you have questions please feel free to contact our 24/7 Customer Support team on live chat or email.

Are there any surprise nominations at the 2022 Emmys?

The biggest surprise of the 2022 Emmys might be Netflix’s Inventing Anna getting three nominations, despite viewers and critics giving it mediocre reviews. Another surprise is Jodie Comer and Sandra Oh receiving nominations for Killing Eve. Both are great actresses, but many critics and fans panned the show’s final season.

Do I need a VPN to watch the Emmy nominations?

You need a VPN to watch the Emmy nominations 2022 if you want the best streaming experience possible. You also need a VPN if the site you want to watch it on is blocked by your local network. CyberGhost VPN relocates your IP address so you can access blocked sites at places like work or school.

We also give you streaming-optimized servers with fast speeds and unlimited bandwidth, so you can watch the Emmy nominations from anywhere, on any device in uninterrupted UHD. We offer a 45-day money-back guarantee, so there’s no risk to nominate us as your VPN to stream the nominations for the Emmys 2022.

Previous Article Cyberattack Cripples the German Chambers of Industry and Commerce Next Article The Best Way to Transfer Data from iPhone to Android: How to Get Started
Share: