Table of contents
Permanent Injunction Order for All ISPs in the US
Will ISPs Contest the Injunction?

The US District Court for the Southern District of New York ordered all US internet service providers to block 3 pirate streaming sites after a series of copyright lawsuits. The websites in question are Israel.tv, Israeli-tv.com, and Sdarot.tv, as well as any current or future domains that are related to them. You can read the three judgements in their entirety here, here, and here.

In 2021, copyright holding companies United King Film Distribution, D.B.S Satellite Services, and others, filed three lawsuits against these Israeli pirate sites. The companies demanded $150,000 for each work infringed and measures to prevent future infringement. The defendants remained anonymous by using fake identities and they never showed up in court. On April 26 2022, the owners of the pirate streaming sites were ordered to pay $23 million in total in damages.

The court rulings are standard and unremarkable for the most part… except for a groundbreaking injunction that affects all US-based ISPs and may open a huge can of worms.

Permanent Injunction Order for All ISPs in the US

All three rulings come with an injunction against any internet service provider that operates in the US. The court orders all ISPs to block access to the 3 pirate sites and all domains that belong to them now or in the future. 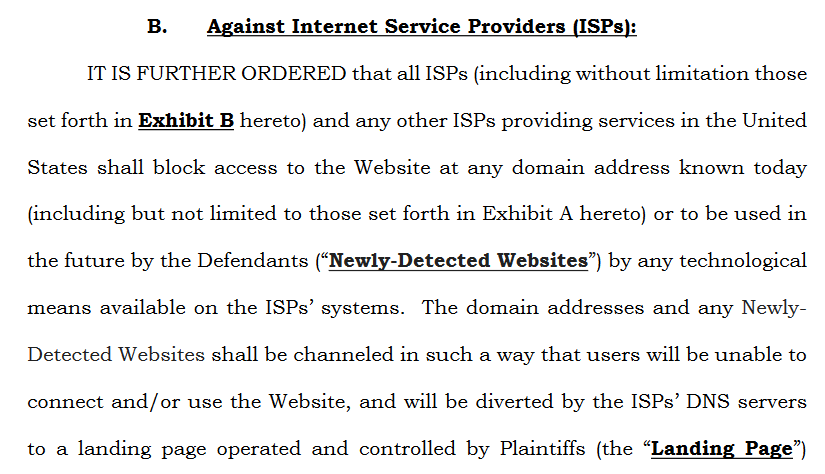 The judge also issued an injunction order against other companies that offered services to any of the pirate websites mentioned in the lawsuits. Google, GoDaddy, Namecheap, and PayPal are some of the companies compelled to obey the court’s ruling. Domain registrars are also forced to transfer the domains to the plaintiffs.

Payment service providers face a similar injunction order. Banks and companies like PayPal had to freeze any accounts that belong to the defendants. Also, the financial institutions have to transfer any funds from those accounts to the plaintiffs until the copyright infringement damages are paid.

Will ISPs Contest the Injunction?

Copyright holders have never received such powers before in the US. Ordering ISPs to block websites and banning companies from doing business with certain parties might raise a few concerns.

We don’t know yet if any of the internet service providers will contest the court’s ruling, but we’ll probably start seeing more website-blocking orders in the future.

The internet is all about freedom, or at least it used to be. The same ban hammer used for pirate websites, might also be used to nail undesirable news outlets and sites that go against the views of whoever is in control of the right institutions. All of this happens in autocracies regularly, but we now see democratic nations like the US starting to impose swepping blocks and restrictions through ISPs.

This time, online censorship is used for the right reasons, but we need guardrails stopping it from being used for the wrong ones in the future. At the very least, we should be alarmed by such a broad ruling.

Protect your online privacy and fight online censorship with a VPN. CyberGhost VPN hides your IP and encrypts your traffic to help you stay anonymous on the web. Your ISP can’t monitor your activity or see what websites you visit. Don’t let anyone restrict your access.

Nicolae has a soft spot for computers and everything tech-related. Growing up in the Wild West days of the internet, Nicolae believes in complete online freedom and unrestricted access to information. That’s why he enjoys being with CyberGhost, teaching others how to stay anonymous and secure on the web. When he doesn’t write about tech, he still dreams about tech when working on his Sci Fi novels. Hopefully, he gets to finish and publish them before the robots take over.

Wow. that is some post. You say ” This time, online censorship is used for the right reasons, but we need guardrails stopping it from being used for the wrong ones in the future. At the very least, we should be alarmed by such a broad ruling.” … but are you sure this is the case?

That is such a wide disparate grouping of internet sites, locations, some redacted or privacy protected host services used, some not. It almost seems too wide, so as to hide the actual target among many to make it less noticeable. i have a feeling there is much more to this story, and much more reason for concern than future “non-right reasons” censorship.

Hi, WookieWisdom. Copyrighted content is protected by law, so it’s no surprise there was legal recourse.
Without any hard evidence, claiming the ban was aimed at a different (and specific) target is speculation at this point.
However, we do mirror your concern for this ruling being too broad, as well as constituting a possible precedent to justify future bans.
Thank you for your comment. Stay safe & secure!