The US Military Buys Location Data Generated by Commonly-Used Apps

Today, leveraging data is the standard procedure for most companies, apps, and websites.

Data acquired from consenting users is resold to other parties without users knowing this happens. We now know that telecom companies resell user location data, and scandals like the Cambridge Analytica often reveal dirty secrets.

Apps US military use to collect unwarranted data

Plenty of mobile apps collect location data and then sell it to data brokers. Some do this without the user’s consent; others bury it deep within their Terms and Conditions or Privacy Policy.

Legally, anyone can buy from data brokers, including the government. And based on The Patriot Act, signed within weeks of the September 11 attacks, the FBI can keep Americans under surveillance without having to notify them.

Data collection, mining, tracking, storage, and analysis have become the cornerstone of US intelligence power. But most users (and sometimes even app developers) have no idea where their information might end up. Plus, the companies that sell user data have little to no safety measures to prevent abuse.

Here are a few recent examples from 2020 that uncover how several US law enforcement agencies have collected people’s data:

June
A news publisher reported that the IRS purchased access to location data through commercial databases.
August
It was also revealed that the US Secret Service buys this kind of data.

During 2017 and 2018, the Secret Service paid the Babel Street app to use its Locate X service.

December
The US Customs and Border Protection paid a government contractor,

mined from apps used by millions of Americans.

How the US military gets its location data

It looks like the US military is using at least two data flows to access people’s location data:

Our access to the software is used to support Special Operations Forces mission requirements overseas. We strictly adhere to established procedures and policies for protecting the privacy, civil liberties, constitutional and legal rights of American citizens.

Location broker X-Mode collects the app users’ location data through software development kits (SDKs). The company encourages developers to integrate the SDK into their apps, then pays them based on how many users they have.

According to X-Mode CEO Joshua Anton, the company tracks 25 million devices per month inside the United States. But 40 million users outside the US, including in the European Union, Latin America, and the Asia-Pacific region, have an active account for this X-Mode app. 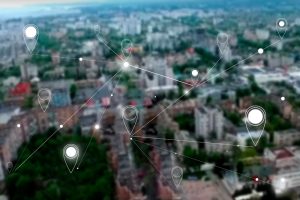 These are the targeted apps

The most popular and used apps for gathering location data are a Muslim prayer and a Quran app, with more than 98 million downloads worldwide.

While it feels like we’re reliving the aftermath of the 9/11 “war on terror” principles, the US military also seems to be interested in location data provided by at least:

The apps sending data to X-Mode include Muslim Pro. This app reminds users when to pray and what direction Mecca is, based on the user’s current location.

Network analysis research showed that both the Android and iOS versions of the Muslim Pro app sent granular location data to the X-Mode endpoint many times.

In response to the report, Muslim Pro announced it would stop sharing data with X-Mode. Apple and Google said they would ban any apps that use X-Mode’s tracking software from mobile devices that run iOS and Android operating systems.

Another app that sent data to X-Mode was Muslim Mingle, a dating app downloaded more than 100,000 times.

The “Third Party Doctrine” gets a twist

In 2011, police arrested Timothy Carpenter on suspicion of participating in a series of armed robberies in and around Detroit. During the investigation, FBI agents acquired transactional records from Carpenter’s cell phone carrier. But Carpenter argued that obtaining cellular data without a warrant violated Fourth Amendment rights.

The Fourth Amendment of the US Constitution protects people from unreasonable searches and seizures by the government.

In 2018, the ruling in the Carpenter v. the United States case argued that government entities should get a warrant to access cell site location information from a cell phone company—the detailed geolocation information generated by a cellphone’s communication with cell towers.

Before Carpenter, government entities could have attained cellphone location records by claiming the information is part of an investigation. Despite the ruling in this famous case, US law enforcement and other government agencies keep misusing unwarranted data tracking. Plus, they still rely on cell-site simulators (better known as Stingrays) to intercept phone communications without a warrant.

US Senator Ron Wyden promises a law that will forbid unwarranted data tracking and collection:

I’m drafting legislation to close this loophole and ensure the Fourth Amendment isn’t for sale.

The promised legislation is still a work in progress, but Wyden has an extensive history of introducing legislation supporting people’s right to privacy and condemns illegal surveillance.

Fingers crossed that this new law will be drafted sooner, along with many others that will keep pleading personal data protection, including your digital identity.

However, for these laws to be effective, they should also be respected and applied accordingly.


Do you believe the US will end the domestic spying game? Will the current US administration’s decisions uphold unwarranted and illegal surveillance?

This was a great article but it doesn’t go far enough, the main offenders that obtain and capture and sell your data are Google, Amazon, Apple, Microsoft, Facebook and Twitter. This is part of their business model and should be illegal.

Previous Article Charity Scams: How to Spot Them in 7 Easy Steps Next Article The Cybersecurity Challenges the Biden Administration Faces
Share: