How to watch channels from Globosat with CyberGhost VPN

Connect to a Brazilian server optimized for Globo

Globo got its start back in 1925 and grew into one of the biggest TV providers in Latin America. Now, more than 17.2 million people tune in daily.

As one of the largest media companies in the world, Rede Globo produces over 2,400 hours of entertainment and 3,000 hours of journalism every year. They really have something for every taste.

If you want to watch live streams or get video on demand from channels like gnt, SporTV, BIS, MAIS, TELECINE and Premiere, the Globosat Play app is what you’re after.

One important part of the Globo family is Globo Sport TV. You might also know it under its local name, Globo Esporte. The channel has been keeping sports enthusiasts glued to the screen since 1978, covering everything in sports news from the latest results to transfers, trades and tables.

Globo Sport TV caters to all tastes, reporting on athletics, basketball, boxing, E-Sports, Formula 1, football, futsal, handball, judo, swimming, and even volleyball. With Globo, you can stay on top of every win and loss in the sports world.

Let’s not forget they offer live coverage for all international championships, such as:

But here’s the thing. You can only watch Globosat Play and Globo Sport TV if you’re in Brazil. If you’re traveling or living outside the country, a virtual private network is the right solution for you. 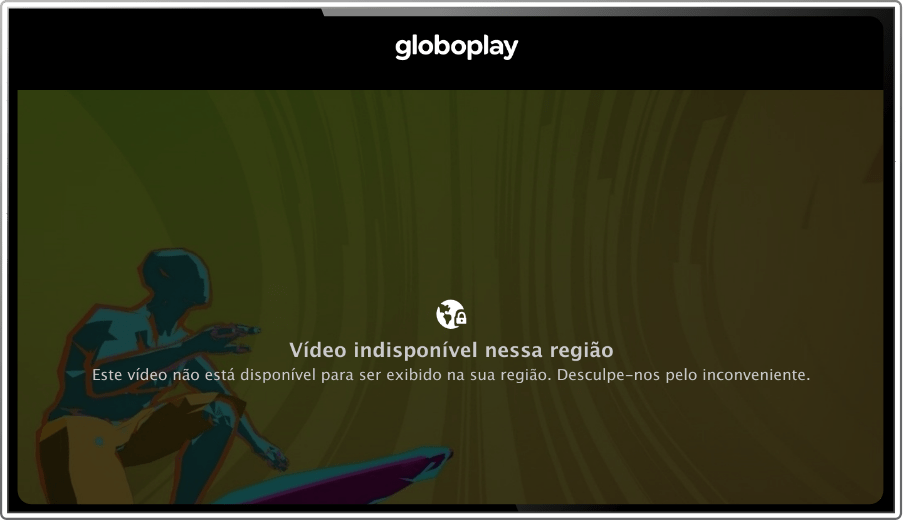 No matter where you are in the world, you can access Globosat Play and watch Rede Globo and Globo Sport with a bit of help from CyberGhost VPN.

As your VPN provider, we hide your IP address and swap it for a Brazilian one. For Globosat and Globo Esportes you’ll seem to be within Brazilian borders. You’ll have no issues streaming their content.

Get ready to follow your favorites and celebrate their victories!

Whether you want to watch TV Globo at home or on the go, we got you covered. We have a wide range of native VPN apps for your devices. You’ll be able to enjoy your favorite content from Globo on Windows, macOS, iOS, Android, or even Smart TVs.

What’s more, just one CyberGhost VPN subscription you can protect up to 7 of your devices simultaneously. This is great news for you. Not only are you streaming your favorite Brazilian shows and sports events; you’re also protecting your entire digital life.

With more than 7600 servers in 91+ countries, we give you the highest possible speeds and unlimited bandwidth for unbuffered streaming.

Our special servers are optimized for streaming Globosat Play and Globo Sport TV. Time to get rid of pesky proxy errors or throttling from your Internet Service Provider!

Choose CyberGhost VPN, not a proxy

Using a free proxy service to stream Globo channels might seem appealing, but it’s a bad decision for your privacy. Since there’s no encryption involved, you’re trading your data for entertainment. That’s not a fair deal for you.

If you want to access Rede Globo and Globo Sport TV safely, the VPN service of CyberGhost is what you need.

Here are the benefits.

If you want to access Globo with CyberGhost VPN, here are some more details. In case you need further guidance, you can get in touch with our Customer Support team via live chat or by email.

Our VPN service lets you connect to a Brazilian streaming server and get access to Globosat and Globo Sport TV. But you will need a separate account for the streaming service. To create it, you will need to register a valid registry identification (CPF).

Do I need a cable subscription to watch Globo?

What devices can I use to watch Globo with CyberGhost VPN?

Will CyberGhost affect my Globo streaming quality or speed?

We have blazing fast servers optimized to stream Globo and Globo Sport TV for you. With our network of 7600+ servers in 91+ countries, we make sure nothing throttles your streaming experience.

CyberGhost VPN is the ideal solution for streaming content from Globosat and Globo Esportes.

But you get much more than just a streaming experience. We offer military-grade encryption, kill switch and DNS leak protection to safeguard your privacy. Also, our strict No Logs policy ensures that you’re the only one who knows about your online activity.

For more information on the importance of digital privacy and anonymity, make sure to check out our Privacy Hub.

Great VPN
Great VPN, can use on several devices, fast, secure and reliable. I have a 3 year subscription and will definitely renew.
Roy McNee
Rated 4.8 out of 5 based on 14159 reviews on