The emergency measures, including a nationwide curfew, came in the wake of mass protests to the country’s dire economic crisis, for which many blame government incompetence.

The government forced all local internet service providers to block access to major social networks ‘in the interests of the country’, according to The Independent.

The action met with immediate backlash. The head of Sri Lanka’s internet regulator resigned within hours of the announcement, while Namal Rajapaksa, the Minister of Youth and Sports and also the president’s own nephew, ridiculed the decision on Twitter after accessing the platform with a VPN.

‘I will never justify blocking social media. The availability of a VPN makes such restrictions completely useless, like the one I’m using now. I urge the officials to think more progressively and reconsider this decision.” he wrote. 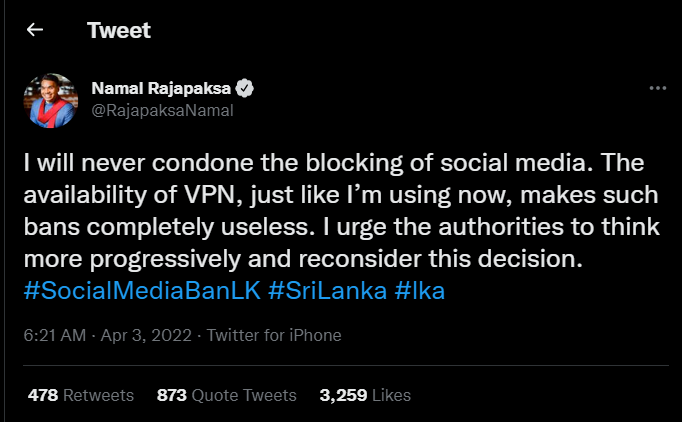 The Human Rights Commission of Sri Lanka also denounced the decision, stating the Ministry of Defense had no authority to order ISPs to comply. Within hours the ban was lifted.

Sri Lanka is far from the first country to try to ban social media to keep a grip on the narrative. To date, over 30 Asian countries have tried similar tactics in times of political unrest. China has a permanent ban on all foreign social media, while India shut down the entire internet in Jammu and Kashmir for over 18 months during the restructuring of the state. Often the ban is just for a short period like when Vietnam blocked Facebook for the duration of US president Obama’s visit.

Governments in African nations like Ethiopia, Congo, Chad, Uganda, and Nigeria frequently crack down on social media just ahead of elections. Countries like Brazil, Cuba, and Ecuador have also clamped down heavily at times — Venezuela has instituted social media bans a dozen times since 2015. Russia, Ukraine, Belarus, and Montenegro are just as bad.

The Banned Played On

The Sri Lanka incident and many before highlight the power and importance of VPNs to allow citizens to circumvent censorship in times of crisis. A VPN masks your real IP address and location to allow you to access blocked platforms and bypass online censorship.

While authoritarian governments can sometimes block VPNs – as Russia attempts to do – where they’re still legal, VPNs continue to provide an essential connection to unfiltered content.

It’s possible Sri Lanka’s decision to overturn the social media ban will lead other governments to reconsider the utility of such actions. Especially, given the easy workaround VPNs offer.

If your democratic freedoms are at stake, defend yourself with CyberGhost VPN. Our VPN encrypts your traffic to evade internet surveillance and replaces your IP address with one in another country to help you bypass social media bans.

Here’s how to ensure you can always access critical information on social media, even if it’s blocked in your country, using a VPN:

Note: In some instances, your mobile carrier may have suspended the service at the behest of the government. In that case, you may need a Wi-Fi connection to access the social network.

Previous Article The Complete Guide to Filing Your Taxes Online Safely in 2022: Avoid Scams and File Your Taxes Securely Next Article The Best Charities to Donate to: Trustworthy & Lasting Impact
Share: