Did Russia Disconnect from the Global Internet?

Rumors that Russia would be disconnecting from the global internet by March 11 appear to have been wildly exaggerated, after Friday came and went without much to write home about. 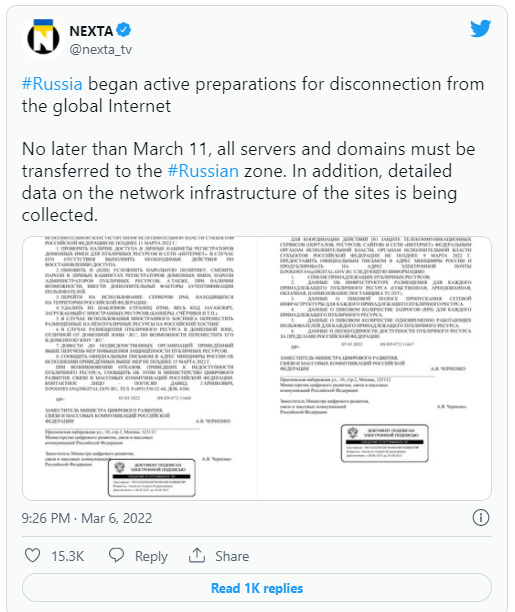 All last week, Twitter was abuzz ahead of Russia’s anticipated D(isconnect) Day on March 11.

It all started after an unverified tweet leaked what appeared to be a Russian government letter containing an order from Russia’s deputy digital minister, Andrei Chernenko. The letter demanded Russian state-owned websites move their hosting to Russian services by the latest Friday. It also instructed them to remove all JavaScript code downloaded from foreign sources and to switch to domain name system (DNS) servers located in Russia.

The document led many to assume Russia intended to cut itself off from the global internet, but Russia has denied it planned to do anything quite so drastic, and that the order was all about taking measures to protect Russian websites from foreign cyberattacks.

Russian sites have endured a barrage of cyberattacks in the past week at the hands of Ukraine’s volunteer “IT army”, and the hacker collectives, Anonymous and Cyber Partisans, who have claimed responsibility for over 2,500 attacks on Russia’s banks, news outlets, and rail networks.

Almost every website in Russia has taken hits in the last week, stated Rafal Rohozinski, principal at the research and strategy firm SecDev Group.

No surprise then, that Russia is making moves to consolidate and defend her cyberspace. Putin may decide the time has come to cut ties with the global internet altogether and usher in RuNet.

In 2019, Putin tested the concept of a sovereign internet, should Russia be cut off from the global online community. Already in July last year, Reuters reported that Russia had successfully “managed to disconnect itself from the global internet during tests.”

RuNet would route all Russian web traffic through state-controlled points and be built on a national Domain Name System which could filter out selected sites with ease.

While it purports to be all about defending citizens’ access to critical digital services and protecting the Russian internet from foreign security threats, the consolidation of all Russian cyber properties into an autonomous RuNet would give the Kremlin even greater control over the country’s online infrastructure.

With Russia’s already poor reputation for censorship, surveillance and the suppression of oppositional voices, the move to RuNet has freedom of speech advocates on high alert.

While the Russian government claims its intentions are solely to reduce cyberattacks, many fear Russia is trying to create its own version of the “Great Firewall of China”.

“Increasingly, authoritarian countries which want to control what citizens see are looking at what Iran and China have already done. It means people will not have access to dialogue about what is going on in their own country, they will be kept within their own bubble.” cautioned Prof. Alan Woodward, a computer scientist at the University of Surrey, in a statement to the BBC.

The actions could turn Russia into a walled-off digital island similar to China and Iran, where the state tightly controls the internet and censors foreign websites and dissent.

Cut Off or be Cut Off

At this stage, though, it’s less a case of Russia turning its back on the global internet, than it is the other way around.

Since the Ukraine conflict began a couple weeks back, major global tech companies like Google, Facebook, Apple, PayPal, Amazon, Visa, MasterCard and others have all suspended services to Russia. This has left Putin with little choice but to make alternative arrangements now that citizens can no longer use the everyday digital services their lives depend on.

Last week, Ukraine asked the official internet governing bodies to kick Russia off the net. The request was rejected but that didn’t stop major internet backbone providers, Lumen and Cogent, from going ahead and cutting Russia from the world internet.

This should have crippled Russia’s internet but against all expectations, and perhaps testament to Russia’s ability to make quick alternative arrangements, it appears to still be kicking.

On Friday, the expected D Day for Russia, Network intelligence firm ThousandEyes confirmed that Russia’s connection to the global Internet is as strong as ever, with global transit providers still exchanging traffic with major Russian ISPs, just from locations outside of Russia.

As a result, the Russian people continue to have access to the global Internet—at least at an infrastructure level.

Putin has yet to draw up the moat bridge between Russia and the global internet, so we can only speculate about the implications of his planned RuNet. Will it be a fortress or a dungeon, cutting Russian citizens off from vital information and pushing them further into the darkness of state censorship and oppression?

Time will tell, but as the conflict between Russia and the West continues, one thing’s for sure. Cyberspace as we know it will continue to change in ways that will impact the lives of Russian citizens and citizens around the world.

In these uncertain times, be extra cautious about your privacy and online security with CyberGhost VPN.

CyberGhost VPN hides and replaces your IP address. That way, you avoid being cut off from vital services or caught in the cross hairs of a cyberwar for being at the wrong place at the wrong time.

Should the cyber iron curtain fall for good, CyberGhost VPN will let you tunnel between both the global internet and RuNet without restrictions. Your double-agent activities are safely hidden behind military-grade encryption so you won’t land into any trouble with the authorities, and no one can track your activities online.

As the world’s first cyber war continues to rage, stay out of the line of fire with CyberGhost VPN.